Joplin has every level of fun. 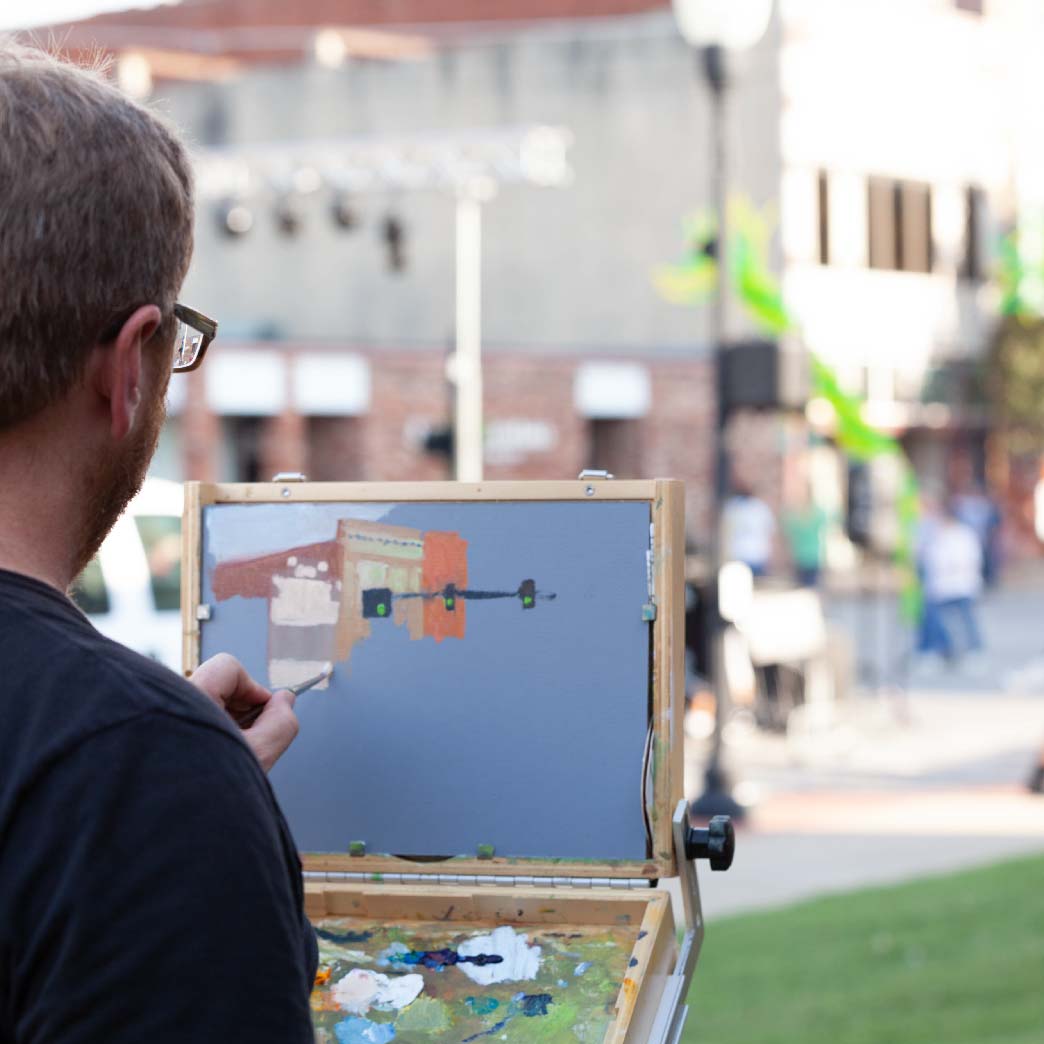 No one does fun quite like Joplin. We're working hard and playing harder as we take world-class entertainment and present it with our own special twist. With dozens of annual events and festivals, a thriving local restaurant scene, and spectacular nightlife, we're your ticket to a good time.

Join us as we celebrate our regional culture with dozens of local festivals, showcases, and competitions.

You can't beat our eats.

With over 250 restaurants, you're sure to find something fun, fresh, and Instagram-worthy.

Enjoy a local microbrew or cocktail and live entertainment at one of our thirty bars and lounges. 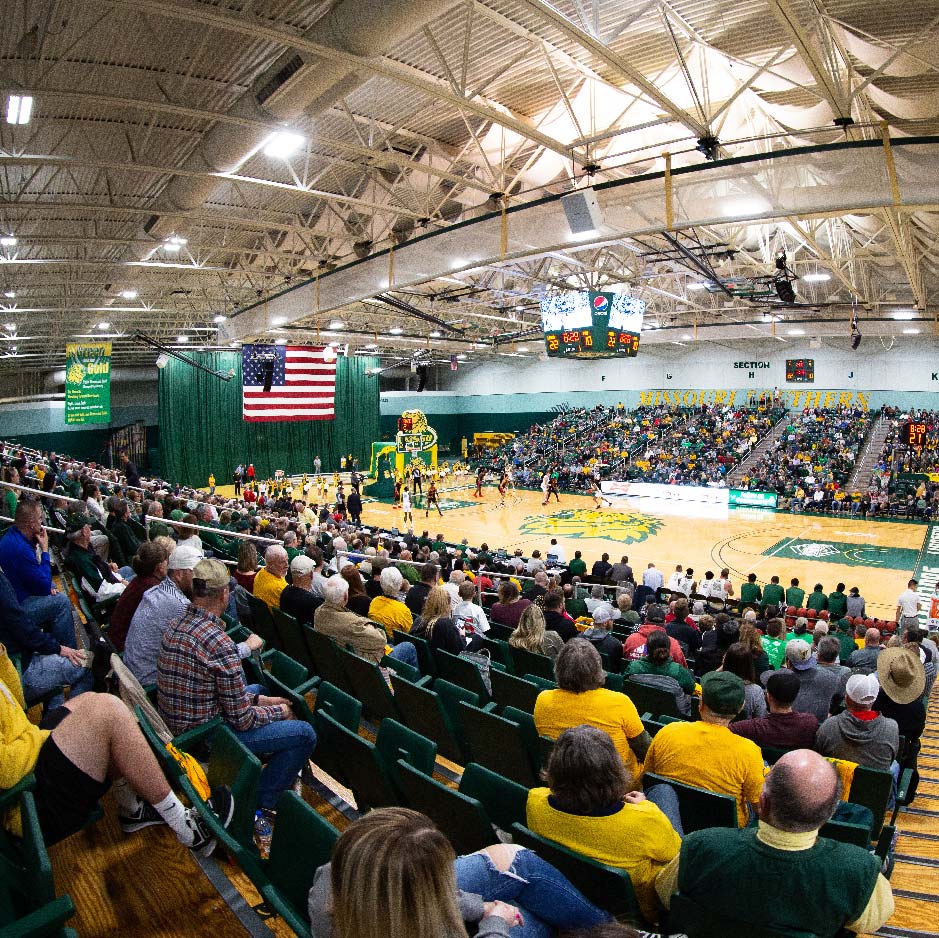 There's something for everyone at our Events.

Our popular annual activities and festivals.

The top events scheduled in and around Joplin each year reflect our community’s passion for the arts, history, music, physical activity, and just being together.
‍

March
First Thursday Artwalk: People stroll among the city’s many art galleries while enjoying exhibits by local artists and live musical performances at this event, which takes place from March through October.

Third Thursday: Main Street between First and Seventh Streets is abuzz with activity from March through October on the third Thursday of each month. Attractions include a maker’s market, live performances, vendor tents, and dozens of food trucks. Downtown galleries and restaurants feature art displays and there are plenty of fun, kid-friendly activities as well. The experiences change as the themes and sponsors shift each month.

PhotoSpiva: The George A. Spiva Center for the Arts has offered this contest for more than 40 years. It is open to all amateur and professional photographers in the U.S. It lasts from March through late April or early May and is the longest running competition of its kind.

‍
May
Freeman Joplin Memorial Run Presented by JVM: The two-day event honors the 161 lives lost when an EF-5 tornado tore through Joplin on May 22, 2011. With a 5K, 10K, half-marathon, relay, and kids’ run, there is a race for everyone. A portion of the proceeds from each race goes back to the memorial and rebuilding efforts.
‍
‍
June
Joplin Truckers Jamboree: Every year, this two-day rally celebrates truckers, giving the community a chance to learn more about them and the rigs they drive. The event takes place at the Joplin 44 Petro Truck Stop and includes an antique truck display, live music, carnival games, and fireworks.

‍
July
Independence Day Festival: Fireworks are the star of the show at this Missouri Southern State University (MSSU) hosted event. Festivities include family activities, live music, and food vendors which are scattered throughout Fred G. Hughes Stadium at MSSU.

Summer Roundup Triathlon: This three-part event is the largest open water triathlon in the Midwest. The race begins in the north of Joplin and includes a variety of distances, including the Olympic distance of a 1,500 meter swim, 40K bike course, and a 10K run.
‍
Carver Day: Each year, Carver Day commemorates the life of George Washington Carver and takes place on the second Saturday in July at the George Washington Carver National Monument in nearby Diamond. The celebration is free to the public and features speakers; storytellers; and live music with local blues, jazz, folk, and gospel performers.
‍

August
Emancipation Days: Celebrate African American heritage with this annual cultural festival. Highlights include live gospel music, historical reenactments, a car show, and a movie in the park. It takes place at Ewert Park the first weekend of August.

Shoal Creek Water Festival: Splash into summer with this family-friendly event and its many water-focused activities for both children and adults. Prizes are available for annual contests including a cardboard boat competition, rubber duck race, and a kayak slalom. The festival is organized by the Wildcat Glades Friends Group.

JOMO PrideFest: Presented by JOMO Pride Inc., JOMO Pridefest is Joplin's premier, two-day LGBTQ+ Pride Festival, now held in the heart of Downtown Joplin. This annual, growing festival is dedicated to providing a safe space for local LGBTQ+ members, their families, and supporters to celebrate and be themselves. The event features vendors, food trucks, entertainment, music, games, a Pride Mimosa Breakfast, Pride in the Park, and more.
‍
‍
September
‍Svitak Freedom Ride: There are five route choices in this annual bike ride - 10, 25, 40, 67, and 100 miles. The event is held in the memory of a fallen soldier from the Joplin area, Phil Svitak, and raises funds to buy bicycles for the children of military families at Christmastime.
‍
Carl Junction Bluegrass Festival: Thousands will flock to neighboring Carl Junction for the live music, games, and food offered at this annual three-day, family-oriented festival. Performances by local bluegrass bands are the main feature of the event, as well as a car and bike show, food and craft vendors, raffles, and a variety of children’s activities. The weekend also features a Friday Family Fun Night and the Sunday Pickin’ and Picnic’n community picnic.

Prairie Day: Travel back in time and enjoy the traditional activities found on the Missouri prairie in the late 1800’s. Celebrated on the second Saturday in September at the George Washington Carver National Monument in nearby Diamond, this family-friendly event includes activities like candle-making, basket-weaving, Dutch-oven cooking, music, quilting, and more.

Alpha Airfest: Take to the sky during this two-day event presented by the Joplin Regional Airport and AlphaAir. A variety of vintage planes, rocket trucks, and historic displays will be showcased. Air performers such as wing walkers stage live demonstrations and plane and helicopter rides are offered. Food vendors and bounce houses are also featured. The Airfest takes place the weekend after Labor Day during odd-numbered years.

Joplin Festival of the Arts: Southwest Missouri’s premier fall fine arts festival is held each year at Mercy Park in Joplin. This two-day event celebrates regional and national artists by exhibiting their 2D and 3D creations. It is presented by the Kiwanis Club of Joplin in conjunction with the Joplin Regional Artists’ coalition, Connect2Culture, and Spiva Center for the Arts. 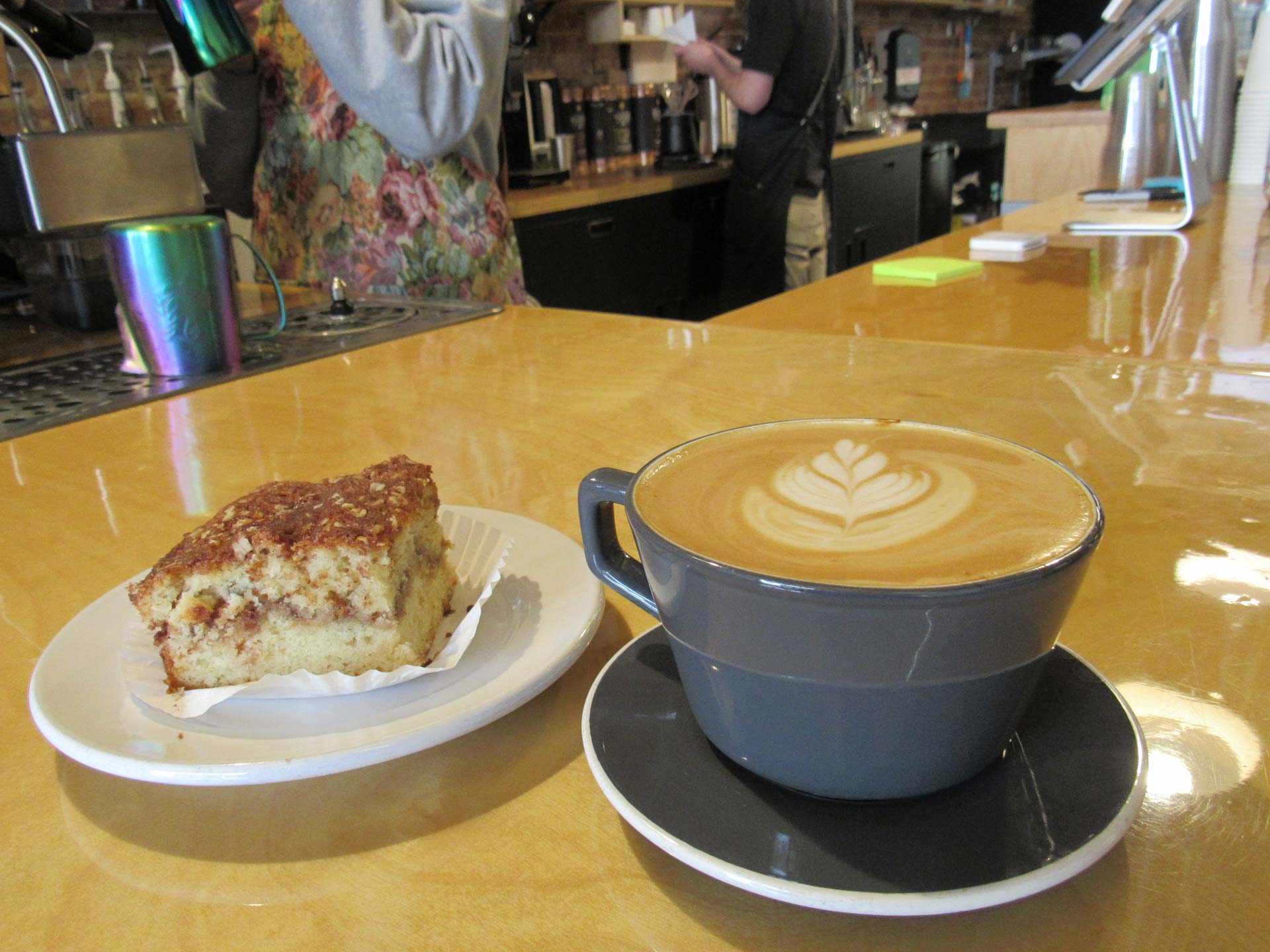 Our food selection has everything from upscale dining to casual settings that deliver high-quality taste and service. Check out some of our dynamic local restaurants that are always serving up fabulous and fresh dishes.

Feel like breakfast? The Bruncheonette fuses local flavors to create a fun, evolving menu that leaves diners coming back for more. For a chic atmosphere and delicious T-bone steaks, try historic Wilder’s Steakhouse. Head to The Boardroom, to enjoy a unique Charcuterie Board with friends and loved ones, or try Hackett’s Hot Wings for your favorite beer and Memphis-style wings.

Want to sample something international? Joplin’s local chefs have a talent for bringing people together while bringing flavors from around the world to the heart of the Ozarks. Check out award-winning restaurants that serve everything from traditional Thai dishes and sushi to Mediterranean and Mexican cuisine.
‍
For a quick and quirky meal, head to nearby Carthage for Food Truck Friday or to Joplin’s Third Thursday to sample fares from a variety of locally owned food trucks, including Bacon Me Crazy, The Drive Way Diner BBQ, Divine Kitchen, Ghetto Tacos, and more.
‍
If you’re looking for familiar favorites, we have plenty of national chain restaurants, including Cheddars, Olive Garden, Texas Roadhouse, Tropical Smoothie, and more.

Feeling inspired after a great meal? Try recreating it at home! Empire Market is open year-round and sources locally grown produce, meat, dairy, and other products. 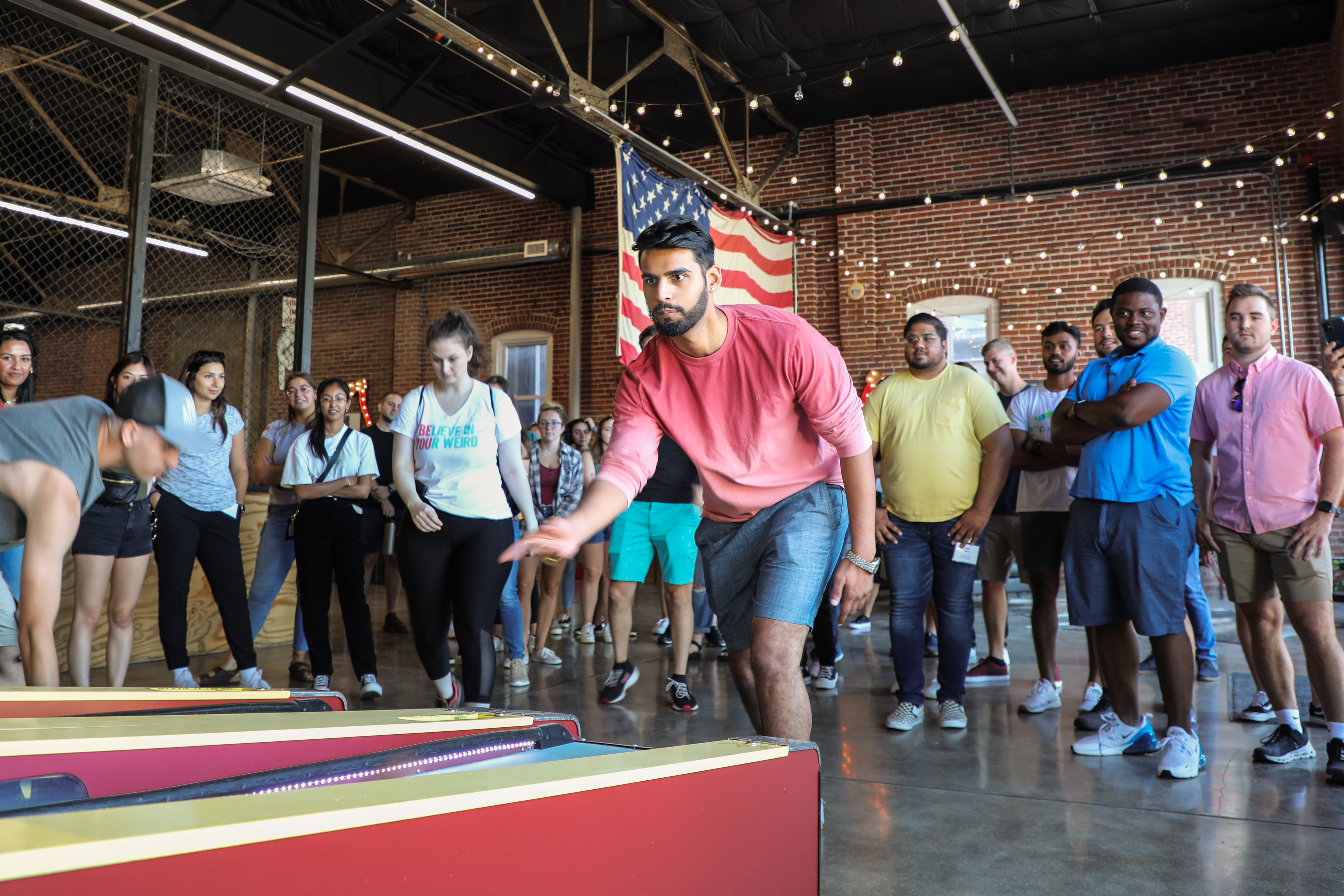 For those who love Nightlife.

Joplin has fun on tap.

When the sun goes down, you'll find there's a nightlife scene for everyone in Joplin.

Treat yourself to your favorite brew while axe-throwing at Main Street Axe Company or immerse yourself in a virtual destination at Pennington Station. Enjoy local craft brew and entertainment at Chaos Brewing. Take the stage for karaoke at Rumor’s Cocktail Lounge or enjoy live music by local bands at Turtleheads Raw Bar.
The perfect place for a Staycation. 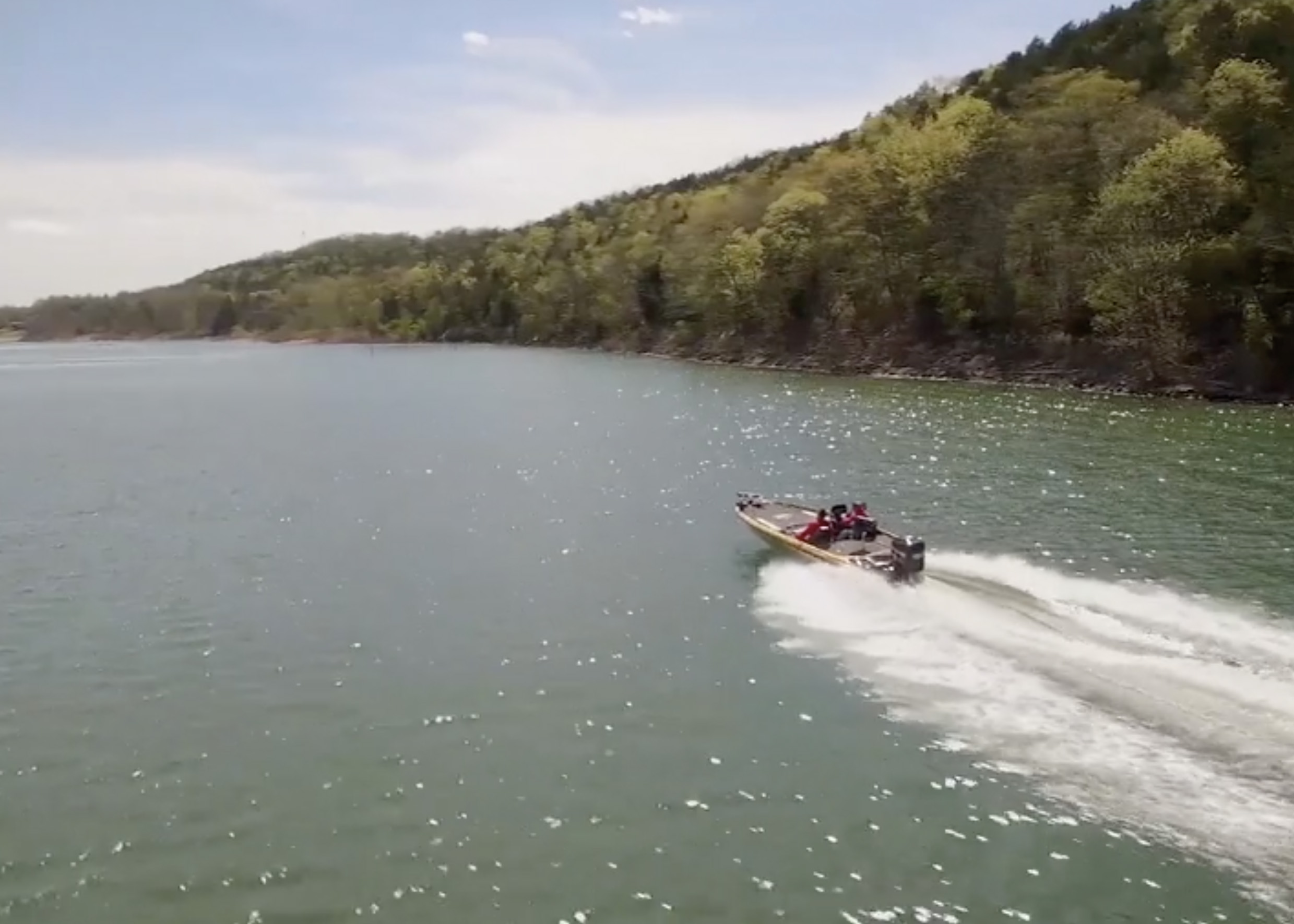 Joplin rests at the intersection of Interstates 44 and 49, making it the perfect distance from several regional hotspots that are perfect for day-trip destinations.